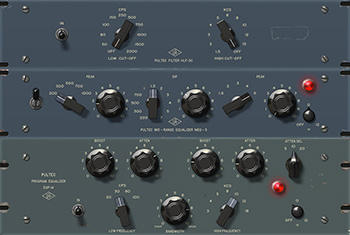 Lauded as the most popular outboard studio equalizers ever made, these classic Pultec EQs can be heard on countless hit recordings from the past five decades. The EQP-1A Program EQ is famous for bringing out individual frequency ranges without significantly altering neighboring frequencies, remaining smooth and musical even with extreme levels of boost. With the companion MEQ-5 Mid-Range Equalizer, producers can skillfully tweak the mid-range thanks to its abundance of band overlap and unique filter interactions. Finally, the HLF-3C adds 12 dB per octave low and high cut filters, providing broad, retro-flavored tone sculpting.

The new Pultec Passive EQ Collection models the complex transformer and tube amplifier nonlinearities of these must-have tools, in addition to their unique filter interactions. The result is a dead-on emulation of the Pultec's signature air, silkiness, and warmth.

Available for purchase via UA's Online Store, the new Pultec Passive EQ Plug-In Collection is selling for $299US, or for $149US for current owners of the legacy Pultec Pro EQ plug-in. This new collection is part of the new UAD Software v7.1, which also includes the Millennia NSEQ-2 Plug-In and new Flex Routing for the Apollo and Apollo 16 Audio Interfaces.