UAD Spark: Get 20+ of the best UAD plug-ins for a low monthly price. Learn More ›

You’ve prepared for this recording for months. Your guitarist has spent hours, even days, agonizing over the tone for her solo. Your singer has wrestled over and over again with what now amounts to an awesome vocal. Your drummer’s locked in to the click track tighter than a proverbial gnat’s posterior. And yet, somehow, something’s still not right. The tracks just don’t pop the way they do in your imagination.

While you’ve been working hard and paying attention to the songs, the parts, the sounds, and all the other big-picture stuff, maybe something’s just ever so slightly out of tune. I’m not talking about the really obvious slightly sharp high E string on the rhythm guitar; sometimes it’s the subtle stuff that makes all the difference.

Some people are more sensitive to tuning issues than others. This tuning sensitivity has to do with your ability to discern intervals in tone — also known as your sense of “relative pitch.” For example, I may not be able to tell you if your A string is tuned to a perfect 110 Hz, but I can tell you if it’s flat relative to your E string.

This sensitivity can be a blessing (or a curse) in a recording environment. And while some types of music can be more forgiving than others (indie rock bands can get away with it more easily than a classical orchestra), there’s a threshold past which tuning issues become just plain painful to listen to.

Tuning is one of the little things that can end up making a huge difference in the final quality of your recordings, so here are some final things to listen for before you start your first take.

Sadly, tuning drums is one of the most overlooked tasks in recording. Maybe it’s because drummers, when they’re playing live, don’t really know what they sound like in front of the kit. Or maybe it’s because it’s much harder to discern how the kit blends with the band in a live setting. Whatever the reason, an out-of-tune kit becomes far more apparent in a controlled studio environment.

There are a host of different theories on tuning drums, and all of them are correct to a degree. Some people prefer to tune the drums to the track. Others feel it’s more important to tune to the resonant frequency of the drum itself. As with most things musical, it comes down to using your ears, and what sounds best with the song. 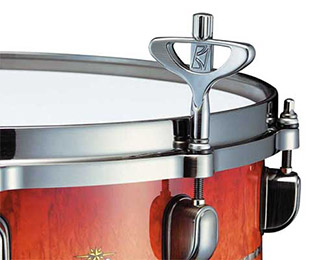 Tuning the drums can make your recordings
much more cohesive.

If you do opt to tune to the track, it’s typically the snare that’s most prominent. Many drummers use more than one snare during a session – metal or wood shell, deep or piccolo – depending on the pitch and tonal quality desired.

Generally speaking, the biggest sonic issues with snare drums on a recording come down to resonance or rattling. If you’re picking up excessive rattling from the snares, first check the snare wires themselves – are they straight and centered on the drum? Sometimes loosening the lower head slightly can reduce the buzzing of the snare wires. Typically, though, it’s a resonant vibration from a tom that’s causing the buzz. Try hitting each tom and listening to which one causes the problem. Retuning the offending tom slightly can reduce or eliminate the problem. (A muffling ring can also do the trick, though sometimes at the expense of good snare tone.)

Tuning the kick drum can also be a challenge. Tune it too low and it will lack punch, too high and you lose power and thump. I like to get a good kick sound in the room, then address the kick drum sound with a combination of microphone choice, mic placement, and blankets.

Tuning toms is a whole different animal. The challenge there is that, generally speaking, we like toms to ring – just not too much. And we like their ring to not affect adjacent drums. Often it comes down to the drummer’s choice of heads. Some drum heads seem to exude a slight “ping,” reminiscent of a basketball, which can be tough to eliminate or EQ away. Often this can be remedied by detuning the top or bottom head.

Some drummers recommend tuning the top and bottom heads to different pitches to reduce resonance. I’ve worked with a couple of studio drummers who try to tune the top head somewhere between a minor and major third higher than the bottom head. I say “try,” because the pitch can vary a bit, depending on where you hit the drum. The pitch of the head will also drop as it’s being played, and as temperature, humidity and other conditions change.

In relation to the song, many drummers try and tune their toms at intervals around a fourth apart. This isn’t bad for an average kit with two rack toms and a floor tom. With more toms it’s probably a good idea to tune them closer, say around a third.

Tuning stringed instruments is something of a compromise. The truth is it’s impossible to tune a stringed instrument to a twelve-tone chromatic scale so that all possible intervals are perfect. This is particularly true with fretted instruments. In the end, the best we can hope for is to set up a guitar’s intonation so that the most prominent intervals (octaves, fourths, and fifths) are true. At that point, the other intervals should hopefully be only microtones off, and hence barely audible.

It should be a no-brainer to say that every stringed instrument player should use a tuner. I’ve seen far too many musicians try and tune to a track by ear. Not only is this prone to error, it’s just plain annoying and sometimes impossible. If you don’t own a tuner, treat yourself to one. Today.

Rackmount tuners tend to offer the most accurate results.

There are several varieties of tuners, ranging from large, expensive (and somewhat outdated) strobe tuners to small plug-in boxes with analog meters, to tiny clip-on jobs with LEDs. For the most part, the lower-priced units tend to be okay for stage, but are less than accurate for studio work. If you do decide to use an older tuner with an analog meter, it’s important to keep it level when using it; tilting it will influence its accuracy. Another suggestion would be to use the same tuner in a recording session to avoid the very real possibility that each person’s tuner is giving slightly different readings.

Some of the best and most accurate tuners are the rack-mounted units from Korg and Peterson, though they tend to cost a bit more. These days, many DAW programs, effects units, and even the control panels of some audio interfaces offer electronic tuner settings which can be quite accurate.

Often a tuner can give a false or shaky reading, particularly those lower-priced LED units. To alleviate that problem, start by switching off all effects: reverb, EQ, etc. Select your guitar’s rhythm (neck) pickup, rather than the lead (bridge) pickup. Roll the guitar’s tone controls all the way down to eliminate the high notes. Finally, pluck the string gently right over the twelfth fret, instead of over the pickup.

This technique works because you’re eliminating most of the higher harmonics and generating the most pure, fundamental-rich tone. It’s also why playing closer to the bridge generates a more trebley, twangy tone than playing near the sound hole or pickups.

In doing this, it’s very important to pluck the string very gently. Plucking a string hard will generate an attack that is sharper than the note itself.

Of course, there are myriad other variables to consider when dealing with stringed instruments, including intonation. Try this experiment: play a 12th fret harmonic and compare its pitch with a fretted 12th fret note on the same string. Chances are good that the two pitches will be slightly off. A chord played on an instrument with poor intonation will sound right in one position, but the same chord further up the neck will be out of tune. A professional setup on the guitar’s bridge can help alleviate this, but again, it’s pretty much impossible to achieve perfection.

Other issues to consider include temperature, humidity, and air pressure, all of which can affect an instrument’s tuning. Then there’s the fact that every instrument is unique – the type of wood used, particularly on the neck, can make a difference, as can the type and gauge of strings, the height of the frets, how the neck is attached, and of course, how a player’s style affects an instrument’s tuning.

Close Enough for Rock and Roll…? 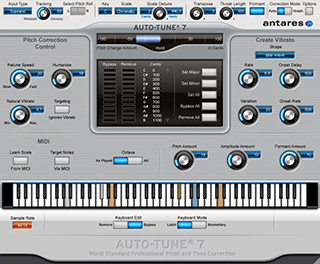 Software options like Antares Auto-Tune can help
you make final tuning tweaks in your DAW.

As you can imagine, there’s a good chance that no matter how diligent you try to be, you may still run into some situations where tunings don’t quite mesh. These days, there are plenty of ways to address the issue with technology. Pretty much every DAW (and most tape machines, if you still go that route) can alter a pitch or a track by microtonal increments, allowing you to tweak the tuning of a given track. And of course, there are several variations on auto-tune plug-ins as well.

Any of these tools will enable you to fix tuning issues in the mix, and if you’re so inclined you can get pretty surgical in your approach. But to what end? Just like quantizing rhythm tracks to soul-less perfection, tweaking every microscopic note of every part is the audio equivalent of chasing your tail until you lose sight of everything you ever loved about music.

In short, there is no tuning perfection. And at the end of the day, that’s not really the point. What’s important is not whether every note and each harmonic are perfectly in tune, as much as how things blend together.

As I say in pretty much every one of my columns, your ears are your most important tool. A great song is a great song, and imperfection is often an important part of what makes it so. Do get your instruments in tune, but don’t make yourself crazy. Strive not for perfection, but for what sounds good.

When most people think of stereo recording, the first thing that comes to mind is a matched pair of microphones, arranged in a coincident (XY) pattern. But while XY microphone recording is the most obvious method, it's not the only game in town

Mixing in Stereo: Adding Width and Depth to Your Recordings

Here are some helpful tracking and mixing techniques to create a deep, wide, and clear-sounding stereo recording.

Magnetic tape remains the most beloved of recording mediums. Learn how to get that classic magnetic sound, without spinning your reels.